I grew up in a country with people who by day proclaimed fierce atheism, and by night clutched to their crosses and illegally acquired bibles.

I wasn’t one of those who prayed in the dark corners or wore a cross, but I did read the bible. The children’s version. That is how I happened upon the Old Testament in elementary school. I was digging the Eye for an Eye, Tooth for a Tooth, braid for a pony tail and such business. What can I say? It made sense to me. And it came in handy on more than one occasion. Especially when dealing with bullies.

One day in kindergarten my little sister was playing on the playground.

A boy, lets call him Alex, walked up to her and hit her with a red brick.

At first we thought it was one of those wooden building blocks, like the ones she was playing with. Then we figured out that it was an actual red brick, the kind you build real houses with. Hence blood and tears.

That night after we returned home from the hospital where my sister had to stay overnight, I was anointed by an authority figure to ‘take care of business’, by any means necessary. This meant a very ugly end of one Alex the bully.

I won’t claim to be a six year old Don Corleone in the making, but if you wanted someone ‘taken care of’, I was the six year old you searched the playground for. 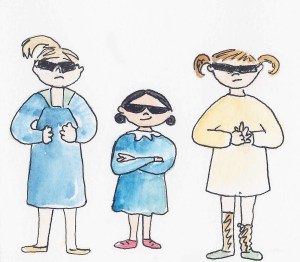 The kid was scared. It was my third hit, and I still didn’t know why I was scaring people so well. I was small in stature, I spoke quietly, albeit fast. So I was always surprised whenever I was taken seriously by my targets. Maybe it had something to do with the two toughies always behind me. 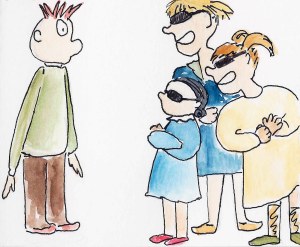 Later, much later, when I had to ‘take care’ of someone else in the US I had no muscle to back me up. By then I learned that words are much more powerful than punches.

I don’t want to say I was enjoying the beating Alex was getting, but it didn’t bother me either. 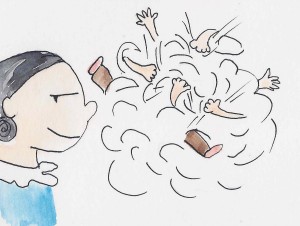 Besides I was pretty sure after that day he would think twice before he attacked anyone else on the playground again.

As usual, my plan was thwarted by my teacher.
I tried to get out of it.

There’s nothing going on, I said, nothing to see, just keep walking, (the way he had done when my sister got attacked), but he wasn’t buying it.

You know, I know now what the US government must have been feeling when it was lectured by Pakistan for killing Bin Laden. How dare the USA find and punish the mass murdering terrorist Pakistan had been harboring for five years? Who do the Americans think they are?
I got the same lecture from a teacher who was supposed to have been watching the playground when my sister was attacked. Apparently his complete incompetence did not mean I could take matters into my own hands. Who did I think I was? Didn’t I feel at least a little remorse for what I had done?

Eye for an Eye baby! I said defiantly. It was a lesson I had leaned from the Old Testament, but I wasn’t about to name my source. Then I’d be in real trouble for sure.

I learned a different lesson that day.

While giving out a much deserved punishment, make sure to not get caught in the act.

USA – next time you take out a terrorist, don’t talk about it. Let his buddies search for him in vain. Let his creditors mobilize a search party for him. When asked, pretend you were asleep at the time. Admit nothing, unless you want to stay in the time out corner for a long, long time.

I had a lot of time outs.