As a young child, I had wanted to find something I was exceptionally good at. I had tried sports, I had tried musical instruments, I had even tried learning languages, but nothing clicked. In kindergarten, my classmate had an Idea.

“Maybe,” she said, “you are not meant to be exceptional by yourself. Maybe you are meant to find an exceptional husband?”

Now, this thought wasn’t particularly popular in the former USSR. Being your own man or woman was very important, marriage was taken seriously and love was not something you read about in a book- it was real. We were sure of it.

Still, I wasn’t adverse to the idea. There were a few potential ‘husbands’ in my kindergarten class. I just had to make sure they saw things my way. 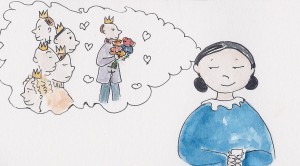 My first attempt was during the play time. (yes, we had play time!) 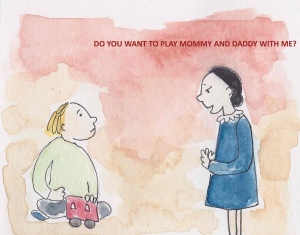 ‘Mommy and Daddy’ game was just us imitating what we thought our parents did – work and eat. And then we would make other kids act as our children and boss them around. Sex was not discussed. It was not known. I had a neighbor friend who fought with me when I told him all children came out of women. He was absolutely positive that boys came from men. His dad sat him straight. He said ‘Son, don’t be stupid.’

In any case, my first attempt at husbandry came to nothing.

I was barking up the wrong tree.

I don’t believe the kid meant it quite like that, but what do I know?

For my second attempt I got more creative.

I wrote a poem to the boy I liked. 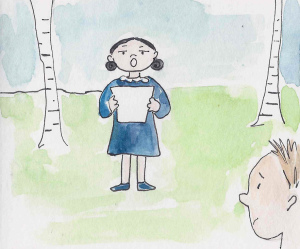 I think it was something like this (roughly translated)

So why don’t you come and climb with me

A tree or maybe two.’

So, it wasn’t exactly Shakespeare. He didn’t have to laugh his way off the fence. This was double humiliation. I had lost at husbandry again, AND found out I was a terrible poet. And so for my last attempt I went a more, lets say ‘desperate’ route.

This was during a gym class while we were climbing  ‘kanat’.

He picked “else” and pulled out his own scissors.

Fearing that this kind of unrequited love would follow me around for the rest of my life I turned to the only person who could possibly shed a light on what I was doing wrong. Yes, I went to a fortune teller. (Otherwise known as the elderly neighbor with an addiction to Turkish coffee)

She made me drink coffee too.

Grosser than gross that coffee was. I was spitting for days.

She turned the cup over and when it was dry she turned it back up and read my fortune.

She looked at me and said ‘You are going to be very famous.”

I said, yes, yes, but am I going to find an exceptional husband? Focus lady, focus!

Still there was hope. 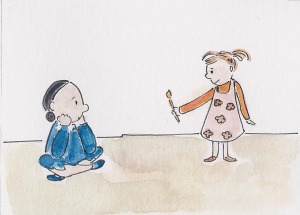 And then my sister came along and suggested we paint the walls of our bedroom. 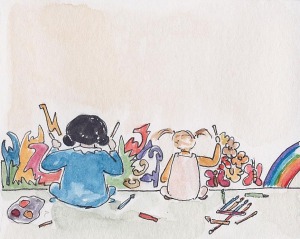 And then our parents came home.

They were not pleased. Go figure.

2 thoughts on “If Genius is not found, then find Husband.”